The science of genetics began around 100 years ago when Mendel cultured peas in his garden and recorded their development in his notes. This science has recently become one of the most interesting in our time.Genetics has many branches; it begins with the study of the cell especially the nucleus which contains the chromosomes that carry the genes and their DNA. 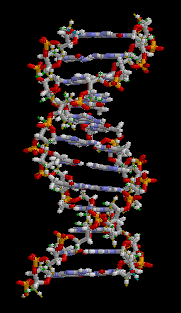 The creation of a human begins with one cell containing 46 chromosomes (22 pairs of autosomes and 2 sex chromosomes (X, Y). One of each pair of chromosomes is from the father and the other from the mother. These combine and divide again and again to form an embryo. If these divisions are not equal it would lead to death of the embryo or a miscarriage, but if it survives with an abnormal number (less or more) of chromosomes, the baby could be born with many deformities. 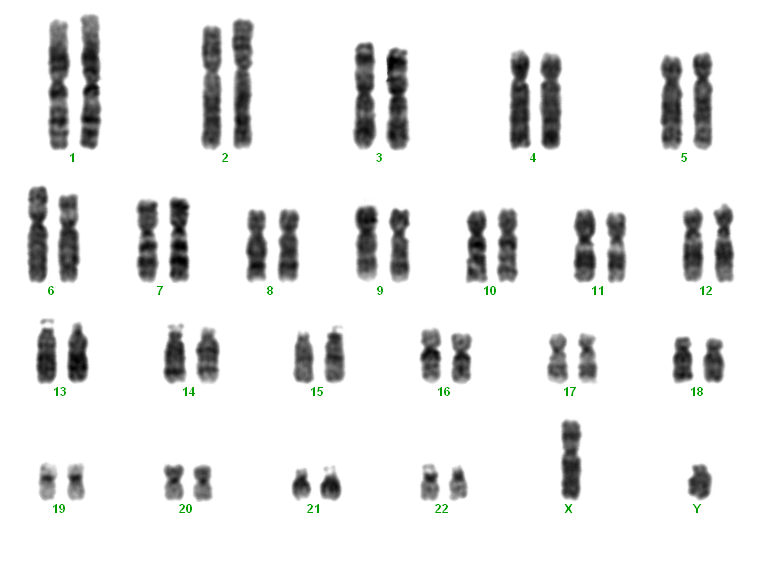 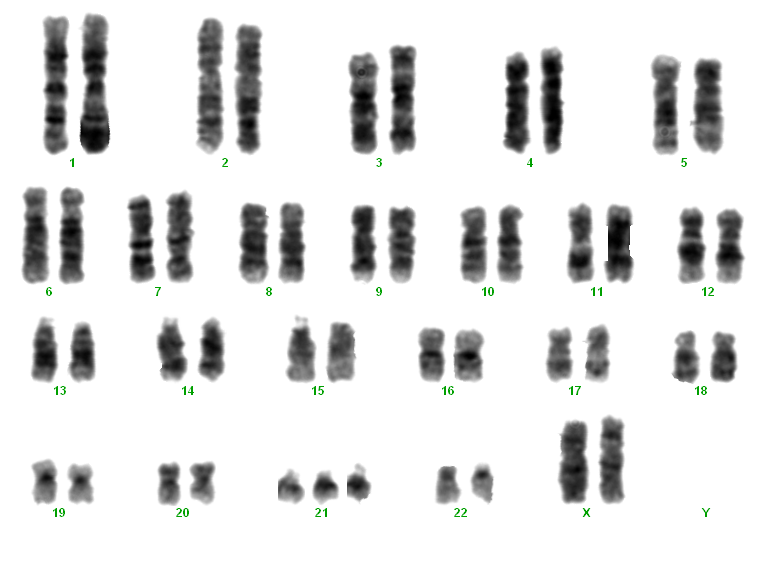 Cytogenetics helps us study these issues and determine the status of the parents that may lead to any complications in their offsprings and also embryo itself after IVF and before transferring it to the uterus.

Our lab is fully equipped to offer this high quality technology which can also help make an early diagnosis of abnormalities and genetic diseases that may accompany the pregnancy in both parents and embryos by the use of sophisticated techniques such as Fluorescence In Situ Hybridization (FISH) or Polymerase Chain Reaction (PCR) in addition to the classical chromosomal analysis.

We can prevent many abnormalities in embryos before transferring to uterus such as:

1. Down syndrome
By using the technique of pre genetics diagnosis (PGD), we can protect any woman above 35 years of age who joins the IVF program, from the suffering incurred in having a child born with Down syndrome and severe mental retardation as well as other problems. By this technique, a single cell is taken from the 6-8 cell embryo and chromosome 21 is studied. Other than two copies of that chromosome in the embryo, it will be affected and it is therefore excluded. This way we can spare mothers from having to undergo amniocentesis after 15 weeks of pregnancy at which point current Jordanian law prohibits termination of pregnancy anyway. 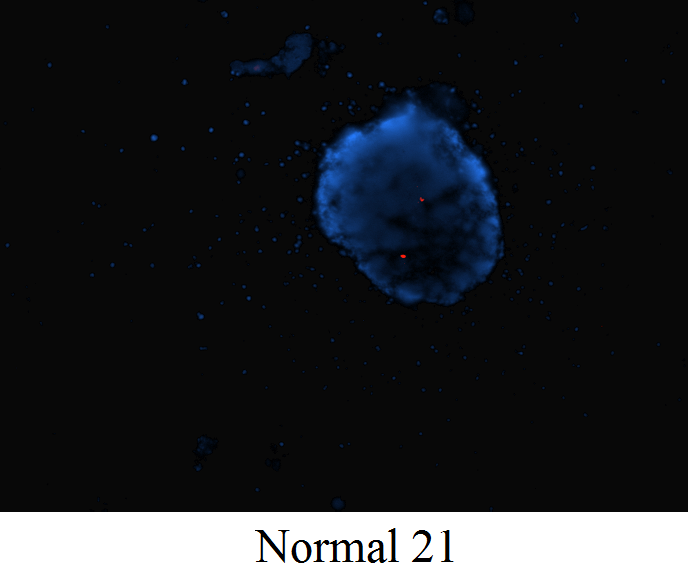 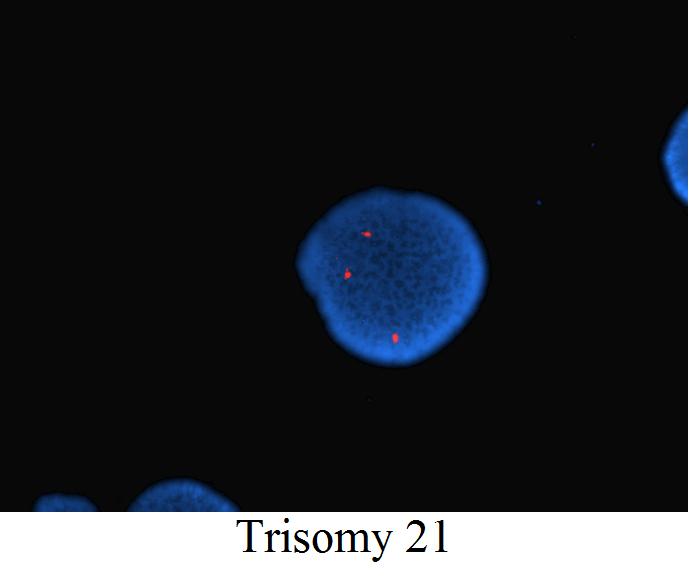 Probes colors and chromosome numbers:
• 212. Sex-linked diseases
PGD technology can also be used to detect abnormalities related to chromosome X and Y, such as Turner syndrome (X) or Klinefelter syndrome (XXY), or to detect X-linked disorders such as hemophilia and certain muscular dystrophies, etc. 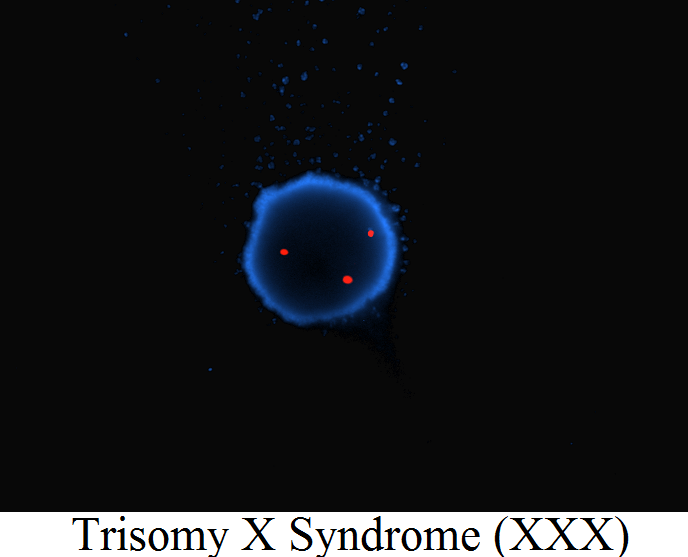 3. Thalassemia and many other molecular disorders 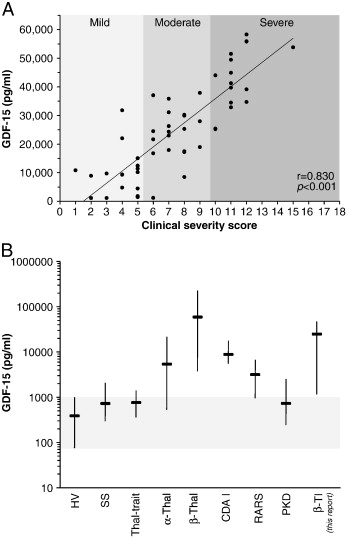 4. Repeated Miscarriages
Healthy embryos stand a better chance to implant in the womb thus reducing the risk of repeated miscarriages. PGD helps such couples by selecting only the “healthy” embryos and increasing the pregnancy rate. Among the abnormalities that can be detected by this method would be trisomy 13, trisomy 18 and trisomy 21. Other abnormalities can also be detected using probe tests. These are expensive and are therefore not offered as routine tests, but are done at the couple’s request especially if one or both are known to have a chromosomal abnormality.

Amniocentesis is also performed at 14+ weeks and amniotic fluid analyzed by conventional methods as well as by using FISH to detect trisomy 21, 13 or 18, or by using PCR to detect Thalassemia A and B or Fragile X syndrome, plus any other molecular abnormality